Robust demand has spread all over Poland. In H1 2019 occupier activity was being seen in nearly all of the industrial regions in the country.

The slightly subdued number of new leases in Q2 was compensated by the highest ever volume of renewals, leading to more than 1.6 million m² of gross take-up* in the first half of the year. This result, however lower than in 2018, was very close to the numbers seen in the corresponding period of 2017, but not driven by such massive transactions as those signed then.
As a result of the excellent renegotiated volume observed in Q2, with deals by firms such as PF Logo, P&G and Stokrotka, the share of new agreements and extensions in total take-up fell from the 78% seen in 2018 to 65% in H1 2019. This can be partially explained by the end of the leasing cycle of deals signed in 2013-2014, when the market was rebounding after the economic downturn. The vast majority of renewals were, unsurprisingly, seen in the largest regions; however, we also noted the maturing of some smaller markets, with the likes of Lublin, Szczecin, Podkarpacie and Kujawy, which in H1 added up to more than 40,000 m².

Although new demand was recorded all over the country, most of it was found in the major markets, Warsaw and Wrocław being the hot spots on Poland’s industrial map. Net take-up in each of those markets exceeded 250,000 m². Also, around 100,000 m² was leased in each of the following markets: Central Poland, Upper Silesia and Poznań. ﻿ 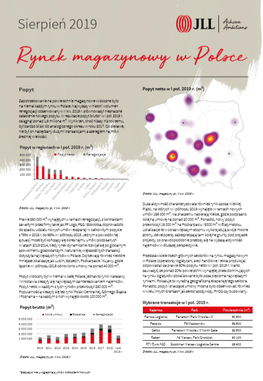