Gross demand was 2.2 million sqm – this is the best result for the first half of the year in the market’s history. New leases and expansions accounted for nearly 1.7 million sqm, which is a 30% improvement Y-O-Y. This means that Poland is the only country in Europe to have seen net demand growth. 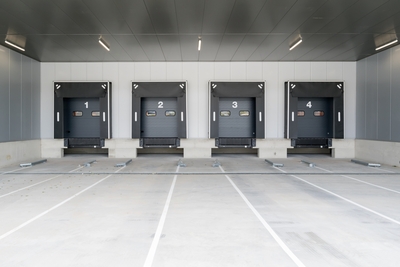 "Gross demand, which does not include short-term contracts, was 2.2 million sqm and a record result for the Polish industrial market for the first half of a year. In turn, new leases and expansions were 30% up on H1 2019, closing with nearly 1.7 million sqm. This gives us a strong second place in terms of net demand. What’s more, it means that we are the only European market that saw a year-on-year increase in demand for industrial space. Such an excellent result is particularly important in these times of global economic uncertainty caused by the global pandemic," comments Tomasz Mika, Head of Industrial Poland, JLL.

This result was made possible by a number of large-scale transactions, which accounted for over 50% of total net demand. In the first half of the year, nearly 20 new leases exceeding 20,000 sqm were recorded. One of them was a contract for 200,000 sqm signed by a leading e-commerce player.

"Over 50% of net demand was located in the Warsaw, Upper Silesia and Central Poland areas, with each of these markets exceeding 200,000 sqm of leased space. The six largest transactions concerned tenants representing the retail sector, including e-commerce. As a result, retail accounted for approx. 45% of total demand. Undoubtedly, such a result is largely due to two leases signed by a single e-commerce player, which in total leased 270,000 sqm in just one quarter. The other most visible sectors were logistics operators and manufacturing," explains Maciej Kotowski, Research Analyst, JLL.

The first half of the year also saw a significant number of short-term leases, which amounted to over 400,000 sqm (which are not included in the general market statistics of JLL). These transactions mainly concerned retail chains, FMCG and 3PL players, who are now experiencing increased demand for products ordered online.

Supply – on the cusp of 20 million sqm

“In H1 2020, over one million sqm was delivered to the market, with 1.8 million sqm under construction. This means that Poland is ranked third in Europe in terms of new supply. Only the Netherlands and Germany are ahead of us," emphasizes Tomasz Mika.

The new supply mainly concerned the area around Warsaw (nearly 390,000 sqm), Wrocław (approx. 225,000 sqm) and Upper Silesia (nearly 195,000 sqm). In total, approx. 75% of new space was delivered in the first half of 2020 in these three locations alone. The total industrial stock in Poland is already nearing the 20 million sqm mark.

"Upper Silesia, where nearly 400,000 sqm is under construction, is currently the most active in development. The following best performers are locations in the vicinity of Warsaw, Tri-City and Wrocław. What is important is that more than 60% of the space under construction is already secured by leases. The continuing downward trend in the share of speculative space under construction may be explained not only by a pandemic, but above all by the very high demand", says Maciej Kotowski.

Industrial investment transactions  also set a record for the first half of a year. "20 industrial investment transactions totaling almost EUR 1.2 billion were completed.. This means that industrial segment accounted for almost 40% of the total real estate investment volume in H1 2020. In addition, the value of transactions in the first six months of the year was higher than any annual result achieved before 2018. This excellent result was mainly due to large portfolio transactions. We expect the second half of the year to be equally intense," comments Tomasz Puch, Head of Office and Industrial Investment, JLL.

The largest transactions in the first half of the year included the sale of Panattoni's portfolio of five facilities to Savills Investment Management, Hines distribution parks to CGL, and the Maximus portfolio - six properties managed by Apollo – to GIC.

In the first half of the year, Asian investors were the most active, especially funds from China and Malaysia. Moreover, the Polish industrial  market was very popular among buyers from the UK and the USA.

In the first quarter of this year, rents remained stable. Warsaw and other urban locations continued to be the most expensive markets. In Warsaw, base rental rates ranged between EUR 4.3 and 5.25 sqm/month. The most attractive rates were offered in non-urban locations in Central Poland (EUR 2.6-3.2 sqm/month).

The average vacancy rate in existing parks slightly increased by 0.2% compared to the end of 2019, and currently stands at 7.8%. 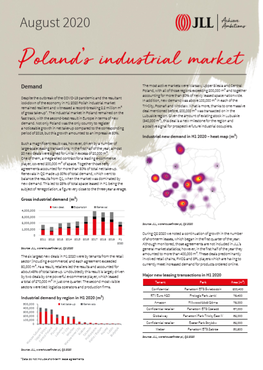